This the blog that dragged me kicking and screaming to my laptop. I emphatically yet respectfully protested to the Holy Spirit.  I knew this blog would cost me more than any other.  Here goes…

Stopping school shootings will be the most divisive issue of 2018.  Write it down.  It threatens to become a debate that will plunge America into an even darker time.  It will expose our penchant for half-cures.

These words, from the song For what it’s worth by Buffalo Springfield is prophetic to right now: “There’s battle lines being drawn, Nobody’s right if everybody’s wrong.”

Gridlock will keep us from a cure.  Politicians will scream at each other. Celebrities will shed crocodile tears on late night shows.  Millions will be poured into maintaining falsehood.  What you will not see is truth and honesty about this horrible subject.  Most will simply want to appear to care. 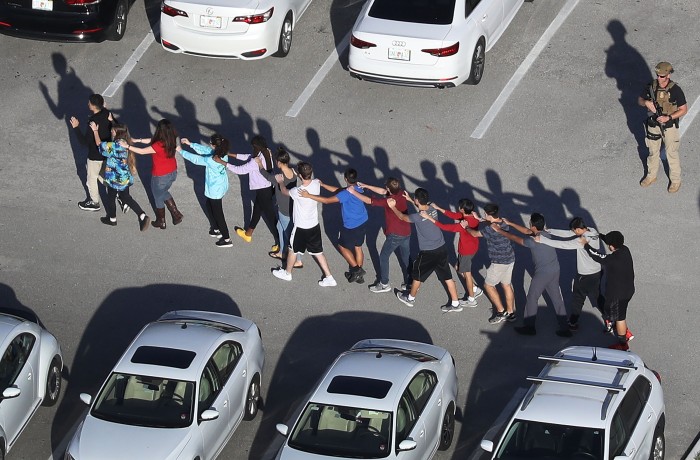 PARKLAND, FL – FEBRUARY 14: People are brought out of the Marjory Stoneman Douglas High School after a shooting at the school that reportedly killed and injured multiple people on February 14, 2018 in Parkland, Florida. Numerous law enforcement officials continue to investigate the scene. (Photo by Joe Raedle/Getty Images)

The tired voices will drag out the usual suspects.  It is amazing how truth survives in our group think nation.  Questions still break in to disturb our presumptions.  Here they are:

WE NEED TOUGHER GUN LAWS!  If that is so, why is Chicago—with the strictest gun laws in America—a killing field?

A bigger question:  We aren’t we enforcing the laws we have already.  How will a new law help?  Every mass shooting involved a law that was not enforced or a killer who fell through the cracks by schools, who just wanted to make them some else’s problem, or agencies like the FBI, that ignored warnings.

In a chilling development, The New York Post reported this:  “Before Nikolas Cruz carried out his mass killing at a Florida high school this week, police responded to his home 39 times over a seven-year period, according to disturbing new documents.”

It’s not fair to pin this completely on them but one thing must be asked:  If you can’t, or won’t, enforce the laws already on the books why do you think is will do any good to add more?

The fact that this is all they can come up with, shows they are not after solutions—but are simply blathering the mantra of their agenda.  Here comes more agenda…

WE CAN’T JUDGE PEOPLE:  A mindless culture is endangering all of us.  This is the culprit: silence in the face of obvious derangement.

This boy was identified as a menace several times.  But no action was taken. Why? It is because we have created a society that accepts all behavior and there’s a tyranny to judge anyone.

When people in San Bernardino noticed neighbors carrying vast armaments into their house and chanting in Arabic, they said nothing.  They admitted they didn’t want to be labeled racist.  The next day, they killed 14 people and seriously injured 22.

Neighbors in Mesquite, Nevada noticed even heavier weaponry loading into a house with all the windows blacked out. They never told police.  Not long afterward, Stephan Paddock, opened fire on a crowd of concertgoers at the Route 91 Harvest music festival on the Las Vegas Strip in Nevada, leaving 58 people dead and 851 injured.

Famed professor Jordan Peterson related something that happened in a University classroom.  A six-foot blonde man stood before the class and said he was in fact, a five-year-old black girl.  The teacher asked if any student thought it was weird.  Not one spoke up.  In a secret poll 22 of them admitted it was weird but were terrified to speak out.

IT’S WHITE SUPREMACY!  Another mantra is white supremacy.  It only took minutes for a writer to claim Nikolas Cruz was part of a white supremacist group.  It went everywhere.  But alas it is fake news. “Leon County law enforcement sources told the Tallahassee Democrat that they could not find information linking Cruz, 19, to the Republic of Florida Militia, as first reported by the group’s self-proclaimed leader Jordan Jereb.”

Do you see them retracting that report?  Of course not, it does advance the narrative.  The drumbeat of racism is required to delay the truth.  It pays bills and distracts from our real problem.

GET THE GUNS!  We have a glaring double standard: Every leftist politician has body guards who carry guns.  Every courthouse has them.  Every bank has them.  But for our children, it is a sacred cow not to have them.  Madness.

Depression and mental illness is pandemic.  Why?  We load the nation down with pills. Why?  This has only made things worse.  The root cause of is too terrible to consider.  The machine that cranks out a Nikolas Cruz operates with impunity.  Here it comes…wait for it.

We are guilty of destroying the family.  We created a swamp for children to demonize themselves.  In our zeal to make everyone right, everything legal, we cursed ourselves with appetites we were not prepared to face.  We loosed a monster.

By shaking our fist at God, we have created a society so miserable, so lonely, so fearful that they are despairing of life and losing natural inhibitions. We have torn down the natural hedges against violence and debauchery.

We won’t admit the existence of evil.  Nikolas Crus is evil.  He willfully gave into the undertow of evil.  Satan filled his heart, but he asked for it. He told authorities that voices in his head told him how to carry out the shooting.  Many boys writhe in worse circumstances, and don’t kill people.

If a society refuses to admit evil how will they stop it in the future?  As the saying goes, the greatest trick Satan ever pulled was to convince people he didn’t exist.

He doesn’t exist because, admitting he exists,  invariably leads to an admission about God, right and wrong and repentance.  We are wicked and full of sin but would rather mask it under impotent laws, crank science and political correctness.

What a moment for the church!  We have words of life for this horrendous moment.  We have pulpits that can go back to the Bible and thunder truth.  We have the awesome power of prayer.  We can tell the masses the truth.  We can be like Peter in Acts 2:40 “ He went on in this vein for a long time, urging them over and over, “Get out while you can; get out of this sick and stupid culture!” That is exactly what I am going to do.