1.The prophets who said Trump would win were right. He did win. The enemy cannot prove otherwise. All we need now is one more miracle.

The second half of the prophecy—that he would serve 4 more years—is ours to claim. The only right thing to do in the face of the impossible is to believe, pray and obey.

Remember our 2020 bible verse: 2 Chronicles 20:20 “So they rose early in the morning and went out into the Wilderness of Tekoa; and as they went out, Jehoshaphat stood and said, “Hear me, O Judah and you inhabitants of Jerusalem: Believe in the Lord your God, and you shall be established; believe His prophets, and you shall prosper.” It brings hope to remember that God has tested His people this way many times before.

2. Democrats tried to use widespread fake mail in ballots to steal reelection from Abraham Lincoln and the plot was exposed. Traveling to Baltimore in the fall of 1864, Orville Wood, a merchant from Clinton County in northeastern corner New York, uncovered the scheme by Democrats to use mail in ballots to defeat Abraham Lincoln. Wood saw them passing blank papers to one another to be signed with the names of active enlisted men, wounded and dead soldiers, and officers who never existed.

Democrats were brought to trial. A New York Times reporter wrote this: “The honest electors of the state of New York have escaped an extensive and fearful fraud, a fraud that might have subverted the honest will of the people and left the state and the nation at the mercy of those who would make peace with rebellion and fellowship with traitors.” Hypocritically, the New York Times today cheers on the kind of fraud they once condemned.

But the important fact is that it was a miracle that exposed Democrats then, and I expect a miracle to expose them again.

3. A groundswell, the true source of any change in America is just beginning. What changes America are groundswell movements. Ignore FOX, NBC, ABC, CBS, and CNN. It is when the masses are moved to action that real change comes.

While they congratulated Admiral Yamamoto for his success at Pearl Harbor he said: “I know the Americans.  I fear all we have done is to awaken a sleeping giant and fill him with a terrible resolve.”

At first, I was deeply concerned that the initial shock of the fraud night might drain the fight out of the millions who support Trump. Now I am seeing a giant with a terrible resolve rising. The masses are not going to let this go away no matter how arrogantly Biden is paraded as president by the fake news outlets.

That is why there is hope and excitement in this situation

This is a message to those who support Mario Murillo’s message to America.

BREAKING NEWS! MARIO MURILLO’S TWO MOST POWERFUL BOOKS TOGETHER. PERFECT READING FOR STRENGTH, POWER, AND DIRECTION IN THESE EXPLOSIVE TIMES. NOT ONLY THAT BUT YOU WILL HELP WIN SOULS IN CALIFORNIA. JANUARY 11-13 WE RETURN TO THE HIGHWAY 99 CORRIDOR OF GLORY: BAKERSFIELD!

That is why we must make this stunning book offer to you. Now in its fourth printing, Vessels of Fire and Glory keeps reaching the top of its category on Amazon.  Critical Mass has now sold over 150,000 copies and remains an international classic on awakening. Both books are still in high demand. So why are we making this amazing offer to you? California is the reason why.

We need to act fast in California for two big reasons. First, Fresno was a shocking breakthrough. Fresno is a sign that tens of thousands of Californians hunger for the Gospel. Second, the battle for America will be won or lost in California.

You get both books for just $20. Not only that—Mario will autograph your copy of Vessels of Fire and Glory. On top of that…you get free shipping.

This is a double win for you. You get these choice books at an excellent price and the proceeds go to win lost souls in California.

And there is still more. If you order 10 or more sets of the Dynamic Duo, your cost is $18 a set.  Plus you will get free 2-3 day priority shipping. Click on link below to order now! 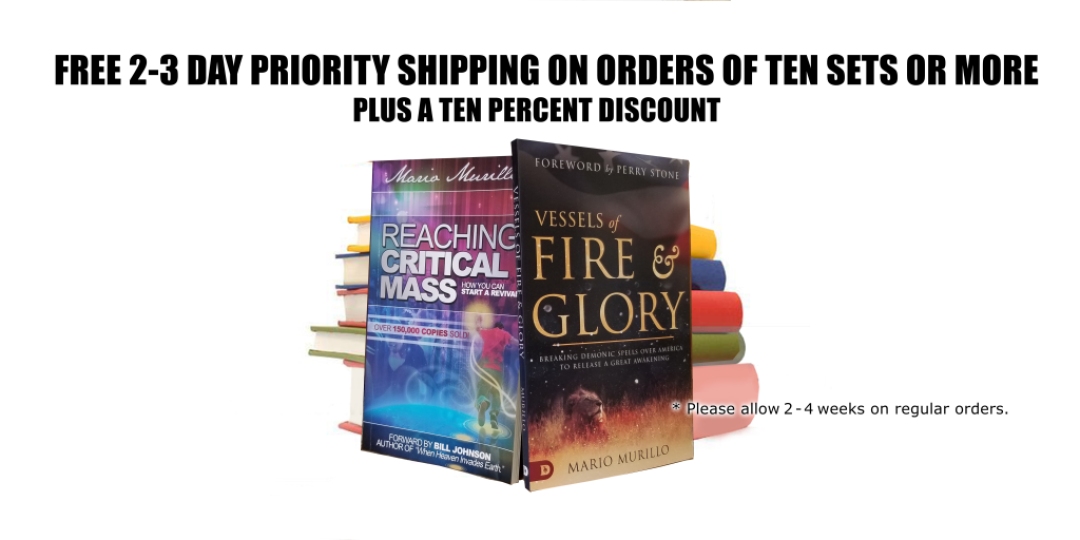 ← THE NEXT 7 DAYS WILL DECIDE EVERYTHING NOW THAT THE SUPREME COURT REJECTED TEXAS. →