HOW CAN YOU CALL YOURSELF A CHRISTIAN?

We had a pandemic that should have ignited the fear of God in most Christians. But it didn’t. We’ve had undeniable evidence of the severe cognitive decline in Joe Biden: the man can’t finish a sentence, he is rude, angry, gives unwanted attention to females, looks confused, and has embraced all that is evil in the Democrat platform. Yet there are many so-called Christians who will vote for him.

There is growing evidence that China is behind this pandemic and has tried to destroy us. But Joe Biden has made a career of giving in to the Chinese government, and is the absolute worst choice for a leader who will stand up against them.

Biden is so desperate to become President that he has vowed to veer left and rally those who support the agendas of Planned Parenthood, the LGBTQ activists, and socialism. He has even made a deal with the other devil, Bernie Sanders.

Joe Biden is the consort of Barack Obama, who has consistently been the most hostile President in history toward the Bible.

How can you call yourself a Christian and vote for Joe Biden? He is weak. He is declining. He will serve at the behest of the worst enemies of both America and the church. He will unravel everything of value you claim to stand for.

Then there are the “Christians” who think that by either not voting, or by voting for a third candidate they are innocent and are ‘voting their conscience.’

It is clear what Joe Biden will do—his every move will be anti-Christian—so how can you believe you are innocent and not do everything in your power to stop him?  The only way to stop Biden is to vote for Trump. No one else, no matter how saintly you esteem them to be, has any chance of winning. And if Trump loses, America will belong to the enemies of God.

Back to the issue of cognitive decline. Below are his actual words as he addressed the coronavirus. Teleprompter and all. 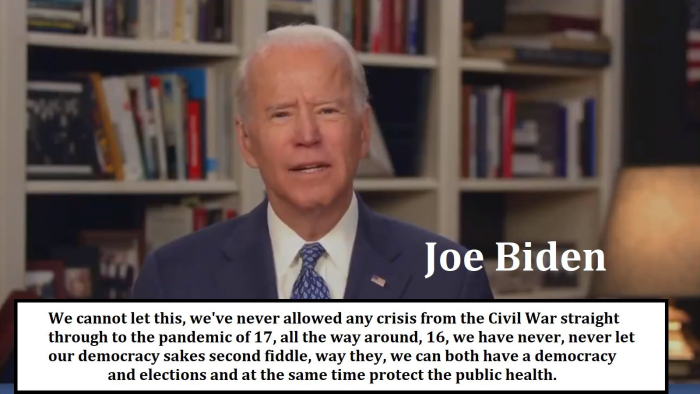 This pandemic has shut down the American economy. How can you call yourself a Christian and vote to elect a cure that is worse than the disease? Should the economy be in the hands of Biden?

Many liberal governors will do all they can to keep churches shut down long after the virus has subsided. How can you call yourself a Christian and allow an enemy of the church and an ally to these governors to put the finishing touches on an already dangerous situation?

Come on—ask yourself, do you seriously believe Biden will be able to rebuild America after all the damage this pandemic has done?  Trump alone possesses the skill and the will to bring us back from disaster. China fears Donald Trump but their mouth waters at the thought of a Biden presidency and a Democrat-run Congress.

Here is my question: How can they call themselves Christians and do such an anti-Christian act as voting for Biden? The answer is simple: modern preaching. Modern preaching has produced the most Biblically illiterate generation of church-goers ever.

Because of modern preaching, Christians don’t know what they believe beyond their false vision of a loving, tolerant and generous God who caters to their every whim. A God to overlook their carnal lifestyle.

Because of modern preaching a moral choice is not as important as ‘feeling loved.’

Because of modern preaching, many who call themselves Christians cannot handle persecution. And this is a critical point. Why? Because the platform that Biden is running on is hatred for Trump. And the hatred of Trump coming from the media and Hollywood makes it uncomfortable for an ambivalent believer to take a stand. They want to be accepted…the same motivation that drives their celebrity pastor. Acceptance!

This corona virus is the warning shot across the bow to a nation that has filled up the cup of iniquity with the wrath of God. So far, many in the church are still drowsy, indifferent and ignorant of the two most important facts that exist in this hour.

1. America must repent or be diminished. We have shoved God away. It grieves God that lost souls go after depravity, but it also grieves God that so-called Christians still don’t get the urgency of this hour and the utter necessity of radical repentance.

The foundations are being destroyed, so how can you call yourself a Christian and vote for Biden?

Vessels of Fire and Glory is number one on Amazon in the Pentecostal and Charismatic category.  Wake up to your assignment in God’s work to save America. It’s $15 each or $12 for ten or more. Get a signed copy plus free shipping by clicking here.  https://mariomurillo.org/product/vessels-of-fire-glory/

← NO. THERE IS NO VERSE IN THE BIBLE THAT TELLS YOU TO OBEY EVIL GOVERNMENT OR LAWS. WHAT ABOUT EVERYONE ELSE WHO WILL DIE? →