THE LIFE AND DEATH QUESTION

I remember when a wise man of God told me, “Answer the question that wasn’t asked.” Example: when Jesus told His disciples that Jerusalem would be utterly destroyed and not one stone would be left upon another, the disciples reacted by asking Him when this would happen. Instead, of answering that question, He answered the question they should have asked, “Take heed that you be not deceived.” The question they should have asked was, “What is the most important thing we should to be ready?”

What question should pastors and the American church be asking right now about the coronavirus?

700 preachers recently participated in a conference-call with Trump and Pence, yet none of them asked the one question they should have asked.

So, what was the question these preachers should have asked the President?

When it comes to repentance, the American church’s message is as garbled and discombobulated as a Joe Biden speech.

Shame on those who dare to invoke 2 Chronicles 7:14, while blatantly violating the conditions of that sacred text!

“If My people who are called by My name will humble themselves, and pray and seek My face, and turn from their wicked ways, then I will hear from heaven, and will forgive their sin and heal their land.”

God says, “My people who are called by My name.” But we are ashamed to be called by His name! Modern preaching made us ashamed of being called by His Name! Christian pastors and singers waffled in T.V. interviews about homosexuality, abortion, the existence of hell, and Jesus being the only way to God.  Denying Biblical truth is even worse that denying His name. Psalm 138:2 says “…For You have magnified Your word above all Your Name.”

Have we humbled ourselves? Many are giddy, many are making light of this pandemic, and others glibly assure us that ‘we will all get through this.’ It is only because the deaths that have occurred have not happened to anyone you personally know and love that you are able to view it from a distance and remain aloof. Because the level of intrusion and financial devastation hasn’t quite struck you personally, you can still act like a spectator.

We as believers are not sober. We are not praying for mercy. We are praying prayers that expose our immaturity, ignorance, and arrogance. 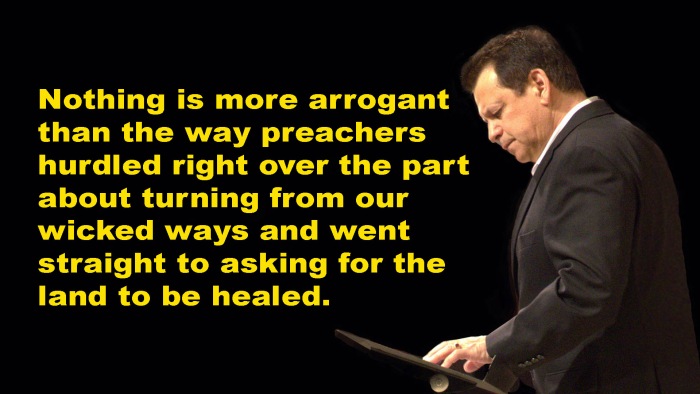 Social media overflows with singers and preachers who offer advice, devotions, and prophecies that downplay, and even belittle, repentance.

Even when we called a big-time fast, the focus was about stopping the virus, not repenting as a nation. We should be fasting with sorrow over the way ‘church incorporated’ has grieved the Holy Spirit. How we abolished soul-winning. How we created low-impact/high-maintenance converts who drain the church’s resources and produce nothing, instead of training warrior-disciples.

Keeping people calm is important. Inspiring people to make the best of this is important. But national repentance is life and death. Anyone who is guaranteeing you that it can’t get worse for America is deluded. Jesus told the crippled man He healed at the Pool of Bethesda in John 5:14b, “Behold, you have been made well. Sin no more, lest a worse thing come upon you.”

Funny, but those who need it the least are the ones who are interceding and repenting the most. They are letting the searchlight of God give them truth in the inward parts. For them there is a new day. Pastors who are in this company of saints will see glory rise upon their ministry. Protection, blessing and healing is reserved for this remnant. I can’t say it any more simply or clearly than Isaiah.

P.S. I want to thank my good friend Tony Scott Pastor, author, and revivalist for inspiring this blog on repentance. He called me on the phone and fired me up with this insight. He pastors a vibrant end time congregation:  theChurch in Maumee Ohio near Toledo.  https://atthechurch.tv/

Let us place a new weapon in your hand. Mario’s new book that saw this coming and gives the instructions for those would let God forge them into a nation-saving weapon.

← This Will Turn THEY TRIED TO WARN US →