Christian Leaders are saying lies about you

Robb Ryerse is a pastor at Vintage Fellowship in Fayetteville, AR and the political director of Vote Common Good just said this: “Trump is an anathema to everything I was taught to love about Jesus, everything I was taught about how to live out my faith. His disdain for decency, disrespect toward basic tenets of right and wrong and complete disregard for the most vulnerable among us could not be more fundamentally un-Christian. To vote for him because he sees the political expediency of supporting restrictions on abortion is a Faustian deal with the devil.”

You and I as believers in Christ are in a war against evil. The one thing you want to do is to defeat evil.  And evil is about to take a nasty turn—a turn you need to beware of. The hate is going to turn away from Trump to you—specifically Christians who support Trump.” Robb Ryerse just said that you are making a deal with Satan by voting for Trump.  According to American Association of Evangelicals, Vote Common Good took money from George Soros.

A video from the American Association of Evangelicals reveals how George Soros, through his many funding ventures, has been busily infiltrating the Christian base in America to divide, and ultimately conquer, the religious minded within the Republican Party.

Truly, with the left, political wars know no bounds. Nothing’s sacred; not when it comes to the leftists’ drive to succeed.

Here’s what AAE put out in a press release: “Democrat ministers Rev. Jim Wallis and allies are now touring many states on ‘Vote Common Good’ buses to … split the evangelical vote before the mid-term elections. The AAE video features the newly released voice recording of [Jim] Wallis of Sojourners as he publicly denied that he was a recipient of Soros funding.”

Now they are at it again with messages like that of Robb Ryerse.

The God haters have failed to bring down Trump. He has survived, yea, even grown more popular; thriving after all their attacks. The economy continues to amaze. Minorities have more jobs than ever. The Left is pulling its hair out as it tries to find a way to defeat our President. So, they went to the dark regions of hell to find out how to do it: shame the Christians and pay Pastors to do their dirty work.

Take Chuck Todd, host of Meet the Press for an example. He portrays Trump supporters as people who have been trained from childhood to believe in what he calls ‘fairy tales’—people ‘who want to be lied to’—and he read this from a letter to the editor, “show me a person who believes in Noah’s Ark and I will show you a Trump voter.”

And because Jesus clearly mentioned Noah and the ark in Matthew 24, this is an attack on our Lord.  This is a direct shot at Christians. He is calling Bible believers buffoons, and by association, he is calling Jesus Christ a buffoon.

Now I get to the darker side of all this: Christian leaders who are telling lies about you. Remember FBI Agent Peter Strzok who said, “Just went to a Southern Virginia Wal-Mart. I could SMELL the Trump support.”

Well, Mark Galli Editor of Christianity Today  magazine just gave us his version of that: “I know hardly anyone, let alone any evangelical Christian who voted for Trump. I describe evangelicals like me as ‘elite’ evangelicals … and this class of evangelicals has discovered that we have family members so different they seem like aliens in our midst. These other evangelicals often haven’t finished college, and if they have jobs (and apparently a lot of them don’t), they are blue-collar jobs or entry-level work. They don’t write books or give speeches; they don’t attend conferences of evangelicals for social justice or evangelicals for immigration reform. They are deeply suspicious of mainstream media. A lot of them voted for Donald Trump.”

What you have here is so smug, and misguided that I can’t find a place to begin responding to it. Mark Galli is, by his own words, an elitist. He is better than you—you sad, redneck, illiterate Christian Trump supporter. He is smarter, he finished college and he has a job. You on the other hand are entry level, remedial and, God forbid, suspicious of the mainstream media.

Worst of all, you don’t attend SJW conferences on immigration. Conferences that we now know were funded in part by George Soros—who doesn’t care about immigrants as much as he cares about dividing the church and creating a one-world government. 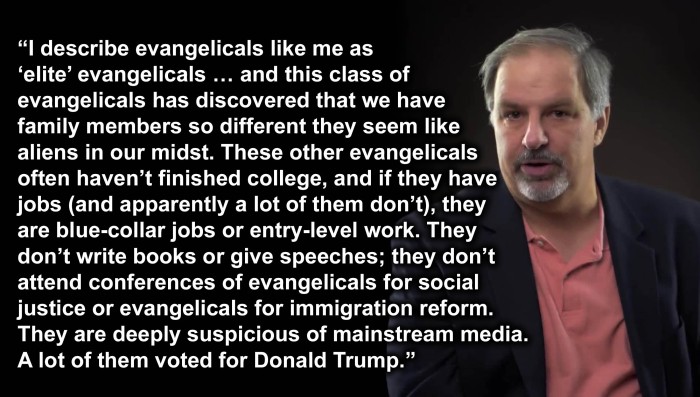 Mark Galli is telling lies about you. He doesn’t understand that the evil one has riled him up and given him a wispy need for recognition from the intellectual community. For ten years I have watched a number of smart Christians seduced in Berkeley by the need to water down their faith in order to be accepted among the “intelligentsia.”

Remember when Peter played the hypocrite and ate with Gentiles until the Jewish believers from Jerusalem arrived? Then he withdrew from the Gentile believers. Paul rebuked Peter publically, and wrote about it in the book of Galatians chapter 2! It’s the same thing. Guys like Mark Galli seem to need the approval of the media. Small wonder he appeared on CNN right after this.

Lest you think it is wrong to name names, take a look at the long list of heretics mentioned by name in the New Testament. From Paul calling out Alexander and Hymenaeus, to John naming Diotrophes. It is biblical to warn the sheep about wolves.

Mark Galli’s now infamous editorial where he called for Trump to be removed from office is his second lie. There is no evidence that Trump committed any impeachable offense. Nancy Pelosi found nothing. That’s why she hasn’t gone forward with the process and presented the Articles of Impeachment to the Senate, holding up the trial she knows is going nowhere.

Mark Galli took their false accusation, and stated it as fact.

But he is not the only Christian Leader lying about you. Beth Moore tweeted Galli saying “My hat’s off to you, @markgalli. Respect.” She is commending someone for making a false accusation. She also lies by signaling that no true Christian man can support Trump. 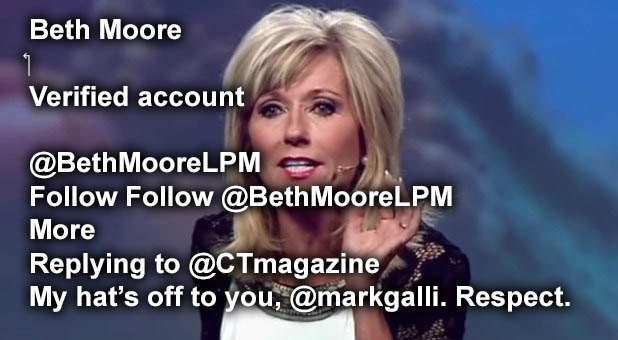 It is also possible to lie by omission. Neither of these leaders ever criticized Obama or the Christians who violated their conscience by voting for Obama.

1.Many of them are positive thinkers and entrepreneurs. President Trump has a winners approach to life, and his followers resonate with that. These are the church members most likely to give big to a vision or help pay off the building.  They are not the critics and legalistic people that hinder you, pastor.

2.Most Christian Trump supporters are patriotic. They love America.  They believe that we live in the greatest country on earth.  They are angry that our laws and our Constitution are being disregarded by secular progressives. They are angry with professional athletes who disgrace our flag and national anthem.  They stand with cops, the military, and first responders.

3. The majority of Christian Trump supporters are all about common sense. They believe:

Shaming Christians who support Trump will be the weapon of choice for 2020. But don’t you dare be ashamed!  These Christian leaders who are lying about you, they are the ones who bear the real shame.

← AMERICA'S DESTRUCTION: WHAT IS GOD TRULY SAYING? THIS MAN IS INSULTING YOUR INTELLIGENCE →