Celebrity preachers use two dumb excuses to remain silent when they should be rallying Christians to do their duty. These dumb ideas are costing us critical time and opportunities to save America.

These ideas set the church back into Obama era apathy at the worst possible time.  Think of what is at stake.  The Supreme Court, the economy, national security, and everything we hold dear will be lost.  Everything Trump tried to do will vanish in an instant. The floodgates of immorality will open.

Here are the two bone-headed ideas.  1. All government is from God and we must submit and not mention politics.   2. A candidate must be sinless or we are choosing the lesser of two evils.

And here are the verses abused to justify those two bone-headed ideas:

Romans 13: 1 Let every soul be subject to the governing authorities. For there is no authority except from God, and the authorities that exist are appointed by God. 2 Therefore whoever resists the authority resists the ordinance of God, and those who resist will bring judgment on themselves.  “For rulers are not a terror to good works, but to evil. Do you want to be unafraid of the authority? Do what is good, and you will have praise from the same. 4 For he is God’s minister to you for good. But if you do evil, be afraid; for he does not bear the sword in vain; for he is God’s minister, an avenger to execute wrath on him who practices evil.”

1. It’s dumb to say stay out of politics and submit to government not matter what:  No sane Christian believes Hitler was God’s will for Germany.  God raised up divine retribution on him through the nations of the world.  God works through people to restrain evil.  The church must do her duty to restrain evil.

German believers abused these same verses to justify their apathy.  Dietrich Bonhoeffer could not open the eyes of the German church about the horrors of Hitler.  His radio addresses warned Germany.  Ironically, he blamed the fad of cheap grace and their blind submission.  They rejected his warnings and the consequence was the bloodiest world war and 6 million Jews annihilated.

Again, the point is that God works through people to stop evil.  The church’s silence in the face of evil is not noble or virtuous, it is itself evil.

Nations can and do pick evil leaders.  Even Israel picked an evil leader: 1 Samuel 8:6 “But the thing displeased Samuel when they said, “Give us a king to judge us.” So Samuel prayed to the Lord. 7 And the Lord said to Samuel, “Heed the voice of the people in all that they say to you; for they have not rejected you, but they have rejected Me, that I should not reign over them.”   Obama was never God’s choice for America.   We have a mountainous stockpile of wreckage to prove it.

When evil reigns, God begins a complicated process to reestablish justice. Human history is messy.  God works in that mess.  We want story book endings but humanity is complicated.  Jehovah works like a surgeon skillfully cutting around vital organs to get at the cancer.  Jesus spoke of the wheat and tares having to grow together until the end—otherwise the wheat would also be lost.   We have a Biblical mandate to discern and get involved in the work God is doing to save our nation.

2. It’s dumb to waste your vote because you “refuse to pick the lesser of two evils.”  You must discern where God is working and support it.  God uses flawed people: Daniel was probably shocked to discover that God choose to use Nebuchadnezzar. 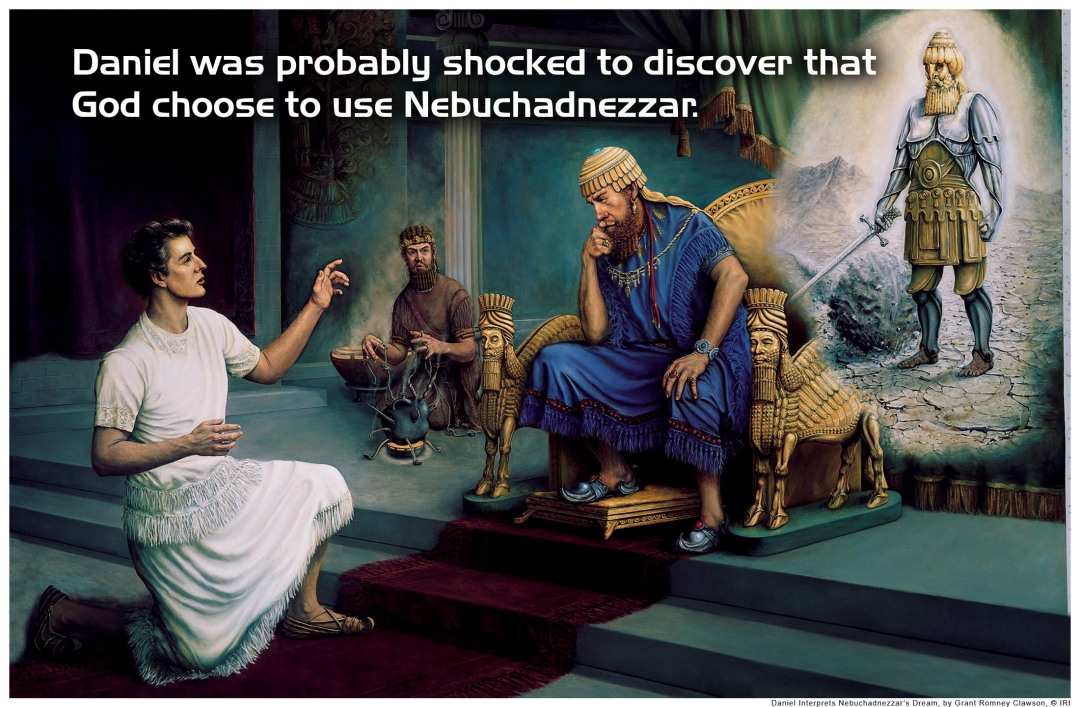 Instead of asking who is without sin, we should be asking where is God working?

Look at what Paul did:  Acts 23:6 “But when Paul perceived that the one part were Sadducees, and the other Pharisees, he cried out in the council, Men and brethren, I am a Pharisee, the son of a Pharisee: of the hope and resurrection of the dead I am called in question. 7 And when he had so said, there arose a dissension between the Pharisees and the Sadducees: and the multitude was divided. 8 For the Sadducees say that there is no resurrection, neither angel, nor spirit: but the Pharisees confess both. 9 And there arose a great cry: and the scribes that were of the Pharisees’ part arose, and strove, saying, We find no evil in this man: but if a spirit or an angel hath spoken to him, let us not fight against God.”

Jesus said that the Sadducees and Pharisees were both evil.  So was Paul choosing the lesser of two evils by siding with the Pharisees?  Or, was he discerning where God could work?   Right now it is Trump He can work with.  But Trump needs a Congress he can work with.  We had better work with God in this next election.

Still don’t know what you must do?  From Nancy Pelosi to Alexandria Ocasio-Cortez, Democrats have vowed to open borders, seize guns, redistribute wealth, skyrocket taxes, and force the church to “evolve.”  The American church still does not see the danger, and that itself is the danger.

Celebrity Pastor: Evil is not hard to spot.  It hates, Israel, Christianity, and Biblical morality, the family, and the unborn. The Democratic Party wears this badge of hate proudly. What else do you need to know?

These dumb ideas are not scriptural. They will play into the hands of those who would take away our rights and forever change America’s system of government.  It will be impossible to withstand the wave of falsehood and hatred in the next election if we do not repudiate these crippling dumb ideas.

But if we see them for what they are, rebuke them and submit to the Holy Spirit…even a small number can create a mighty transformation.

← SHOCKING BREAKTHROUGH Dinuba is a sign and a warning →