I am about to relate to you the greatest intervention of God I have ever seen come to a hurting area. I pray to God you get to read this because, my friend, powerful people don’t want you to know what I am about to tell you.

Here are the names of men murdered in Stockton, a short time before we began ministering there:

Larry Ganner, 66, assaulted and killed April 26 in the 2300 block of E. Washington Street. A suspect has been arrested in relation to this case.

Alan Cazares, 23, was shot and killed April 26 in the 400 block of Delhi Avenue. A suspect has been arrested in relation to this case. 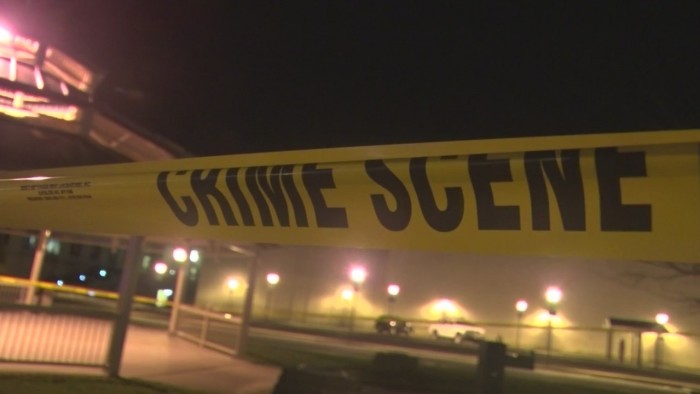 Andrew Molinares, 22, was shot and killed May 21 in the 3000 block of Monte Diablo Avenue.

A man was shot and killed May 22 near the intersection of Sierra Nevada Street and Poplar Street. His identity has not been confirmed.

Robert Renteria, 21, was shot and killed May 28 on Northbound Interstate 5, north of the Charter Way exit. California Highway Patrol is in charge of this case.

This list does not include the killings that took place during the days of the tent meetings, because those statistics have not been released yet.  To put it mildly, the situation in Stockton is insane.  Officer Joseph Silva, a Stockton Police Department spokesperson stated: “This area has been hit hard, and we just had a homicide this week. Now we have five people shot. Enough is enough. We need to bring some type of relief to this area and (to) the police. We can’t do this alone.”

Violence is only one factor in the strangulation of this city. The other is homelessness. It has reached critical mass in the city. And they are at a total loss to know what to do about it.

Why do I tell you this? Because there are things you need to know.  First, you need to know we have placed our lives on the line.  Next, you need to see that it was a miracle anyone came out at night to the tent. People fear the violence. The homeless won’t leave their stuff for fear it will be stolen.

Finally, you need to see who the villains are: they are the Utopian Socialists that run this rogue state−and, they are in denial. California cities are disintegrating. I have zero doubt it has to do with their anti-God policies. They have destroyed the concept of family. They have oppressed pastors. They have burned tax money on lunatic projects. They are so far gone that just saying this may get me banned from social media.

No one had ever done a tent crusade in the park at Weber Point. We had to jump through more Government hoops than you can imagine. They charged us a massive amount in fees just to use a grass field.

Now you know what we were facing when we put up the tent and hoped for lost souls, addicts, and gang members to come hear the Gospel and receive divine healing in their bodies. 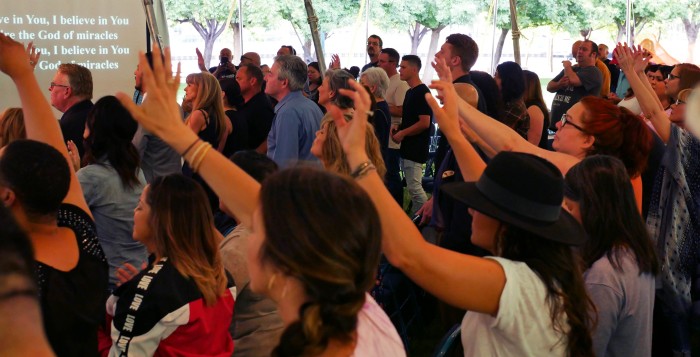 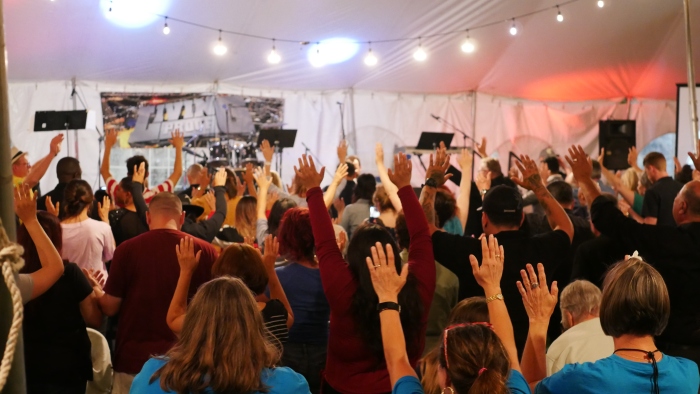 Because we hadn’t yet purchased lighted “exit” signs, the fire chief made us take the walls of the tent out, which made me angry because I felt this made us even more vulnerable to people in the park who might want to disrupt the meetings.

Opening night was the lowest attendance we’ve ever seen in our tent, but it was far bigger that we had a right to expect.  Satan served notice that he wanted us to leave.  He filled a man with rage who jumped to his feet during the service and began to slander me—calling me and the miracles fake, and telling the people that they should leave.

I was shocked at how the crowd, many of whom were not believers, rejected this outburst. They were hungry for hope. If Jesus was real, they were desperate to know it. Their hunger drew in the anointing. I was astounded at how unfazed the Holy Spirit was in a tent without walls in a dangerous park. 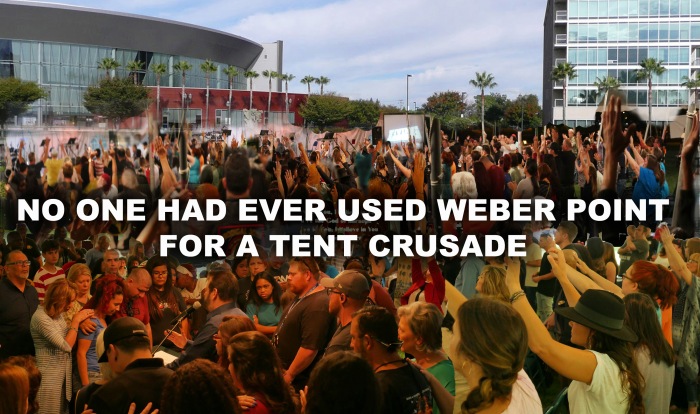 Suddenly, God turned the tables on the enemy−because there were no walls, the people in the park could see and hear everything. Instead of the dark invading the light, the light was piercing the darkness!

There were many miraculous healings. By the Holy Spirit, I asked a young woman to place her hands on her stomach. The Holy Spirit told me that a growth was vanishing. She pressed and pressed, searching for it, but the growth was gone.

What a joy to watch pain from diseases leave the poor who could not afford to languish in emergency wards.  Legs, hearts, lungs and so many afflicted areas of their bodies were healed! 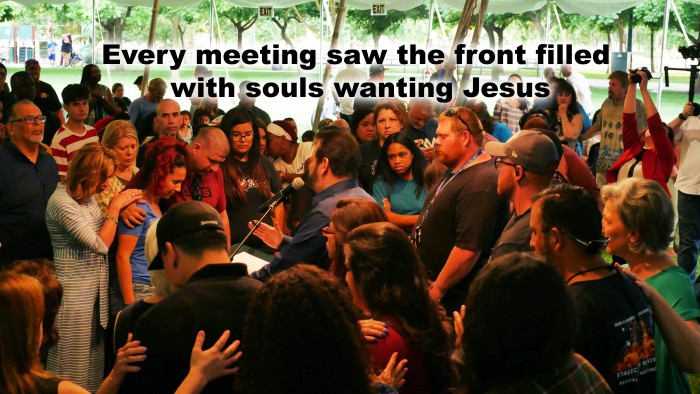 On another night, I asked a mom to place her hand on her daughter’s spine. This was more significant that I could have ever imagined. The young lady had stage-four cancer and the mother blurted out that it had begun in her spine area. Coincidence? Not in a million years!

Every night the front would fill with lost souls repenting and turning their lives over to Jesus. It is awe-inspiring to see souls, totally free of pride, plunging into Christ!

I must give honor where honor is due. We asked worship teams from powerful churches to come and lead worship. We also invited spiritual generals from the region. First of all, I want to honor Bishop Steve Perea from Christian Worship Center in Manteca, who came to the tent regularly and did so much to help us. I also want to honor Verna Brown from Soul Harvest Church in Modesto, who was so supportive. Pastor Deborah Berteau from The House Modesto church brought an army of intercessors, without which we could not have done this. 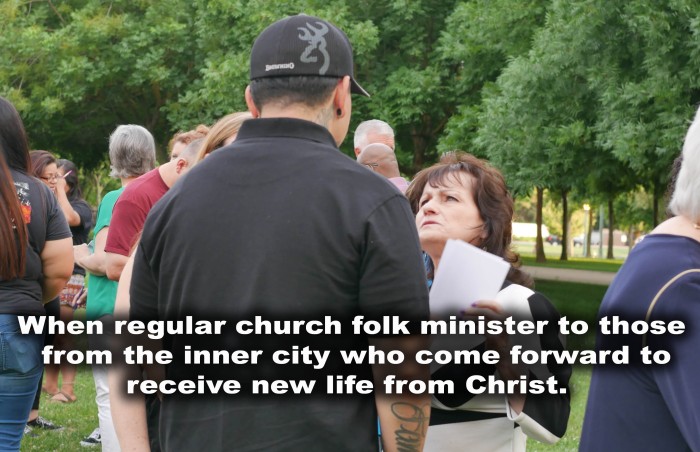 I want to give extra special honor to Frank Saldana from Inner City Action in Stockton knows this city as few do. The efforts of both Frank and his teams are beyond heroic, and they were instrumental in our coming to Weber Point. Last, but not least, I also want to honor Kim Saldana who literally won the war to get us a permit to come to this strategic location.

Before we knew it, the curse over the park was broken, every seat was filled, and every life was getting a full dose of the power and love of Jesus.

I have never seen Satan fight so hard to hold on to people, nor have I ever seen God neutralize so much evil and despair under our tent, and replace it with His righteousness and joy!

And we know that God will give us victory there, too!