HE BEING DEAD YET SPEAKS

“Brother David, we need you now more than ever, we need you to wake up the American church!”  That was my cry when it hit me that today is the 6th anniversary of this prophet going to heaven.  He preached a message that we rarely hear today.  He preached it with a total disregard for his own success or safety.  He spoke the counsel of God with a convicting compassion…”God testifying of his gifts; and through it he being dead still speaks.”  Hebrews 11:4

HE BEING DEAD YET SPEAKS

When he aimed his voice at the corruptions in the church it was devastating.  Here is a sample from 1998: “The majority of churchgoers today soundly reject all prophetic warnings of a coming storm. Indeed, the American church today is the most blatant ‘feel good’ church in all of history. But, like Israel, we’re only experiencing the calm before the storm!

Likewise today, Christians by the multiple thousands are casting off the yoke of Christ, tossing aside all limits and restrictions. This attitude is prevalent in many of the books and magazines you find in Christian bookstores. It’s almost as if our leaders are saying, ‘Relax! God isn’t hard. He’s our Daddy, we’re all his kids, and we’re meant to have a good time. Don’t let anyone disturb your fun!’”

Look carefully at what the man of God is saying—he is spotlighting a disaster.  What is that disaster?  We cannot accept warnings.  False pastors cash in on this carnal appetite for denial in the people.  Even good pastors are hostages of audiences that demand soothing sermons.

Prophets like David Wilkerson were labelled Gloom and Doom. What we don’t get is…it is those who keep lying and refuse to warn the church who are the real gloom and doom. Gloom and doom is when someone deliberately leaves you unprotected and unprepared.  This warning came before 911, before Barack Obama–before gay marriage was legalized–before our standing in the world became so dangerous.  David was describing our condition in 1998—we have degenerated dramatically since then…how chilling is that?

David explains why he was so adamant: “Yet, let me ask you: Why does God tell his prophets to shout their warnings from the housetops? He wants to warn his people – to stir us up to seek him! He wants to convict us of all our attempts to cast off Christ’s yoke and cozy up to the world. He wants us to keep our eyes on Jesus – to seek heavenly things – because those are the only things that will stand in the coming storm!”

Tragically, Christians all over America disregard any crisis that does not directly impact them.  And even after all of the storms that have come, we still do not repent!  As I write you the storm brother David predicted is unfolding. Journalism is dead.  Fake news is standard issue.  Campuses are silencing conservatives and soon will silence Christians. Persecution is here.

Many were relieved when Donald Trump became president. Now a hurricane of hatred being leveled at him and his family—he is subjected to a media assault that prior generations could not have imagined. 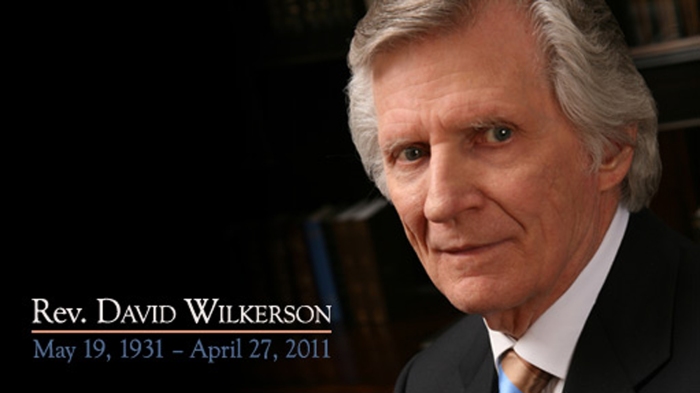 Did last Sunday’s soupy sermon get you ready to stand and fight?  The idea that the seeker model will survive the next wave of persecution is laughable at best.

However, preparation was a  key element of David Wilkerson’s preaching. He was sent to warn the wicked and remind the righteous of God’s power to keep us in adversity. Consider: “The purging will not seem joyous, but rather grievous. But you will soon glorify the Lord for the results in your life. All the anxiety will be gone. All worldly ambition will die. Your spiritual eyes will be opened to truth. The Spirit will give you revelation knowledge. You will exchange the riches of this world for the true riches of Christ Jesus. You will wake up each morning with an over-flowing joy. Your soul will cry out “I found what my soul has been longing for. Rest–beautiful rest in my Lord.” You can then say with David, the Psalmist — “In his presence is there is fullness of joy; at his right hand there are pleasures forevermore…” (Ps.16:11).

David Wilkerson’s words are more relevant and powerful now than ever.   He could comfort with as much power as he could correct. Here are the last words he ever wrote:

“That is when Satan’s hordes come to attack your mind with fear, anger, overwhelming questions: “Where is your God now? You prayed until you had no tears left. You fasted. You stood on promises. You trusted.”

Blasphemous thoughts will be injected into your mind: “Prayer failed. Faith failed. Don’t quit on God—just do not trust him anymore. It doesn’t pay!”

Even questioning God’s existence will be injected into your mind. These have been the devices of Satan for centuries. Some of the godliest men and women who ever lived were under such demonic attacks.

To those going through the valley and shadow of death, hear this word: Weeping will last through some dark, awful nights—and in that darkness, you will soon hear the Father whisper, ‘I am with you. I cannot tell you why right now, but one day it will all make sense. You will see it was all part of my plan. It was no accident. It was no failure on your part. Hold fast. Let me embrace you in your hour of pain.’

Beloved, God has never failed to act but in goodness and love. When all means fail—his love prevails. Hold fast to your faith. Stand fast in his Word. There is no other hope in this world.” Amen.

← AN INCONVENIENT FIRE YOU'VE LOST ME →