NOW FOR SOME REALLY GOOD NEWS

Fasten your seat belt, this is really good news. They gathered with excitement and expectation…but none of us were ready for what happened next.

NOW FOR SOME REALLY GOOD NEWS

It is a good sign…they keep adding chairs.  This is happening most of the night.  Another good sign: the house is filled with youth—youth who do not know Jesus—who battle everything devil throws at our children these days.  The best sign is everyone feels special power vibrating in the room.

We are doing a Living Proof Outreach with Ben Lucero, Isaiah Saldivar and the Awakening 209 in Manteca, California.

My message carries an unusual title: When Satan Helps Start Revival.  I begin by describing the strange experience I had after God ordered me to study the youth culture.  My research became torture as I fully grasped the curse Lucifer has laid on an entire generation.

I could actually sense the evil one boasting and threatening.  He was declaring his wicked intentions: “I will addict them.  I will shame them.  I will drain them of hope.  I will kill them.

Then the voice of God roared, BUT I WILL POUR OUT MY SPIRIT ON THEM!  I tell them “I am here tonight because a fresh outpouring of the Holy Spirit is coming.”  I make a prediction about the emerging army of youth: “You will lay hands on the sick.  You will prophesy.  You will cast out devils.”

Then I explained how Satan is mentally off.  If the devil just wanted to deceive and damn souls he would make everyone content like cattle being fattened for the slaughter.  Instead, he tortures, punishes and makes his victims miserable.  He can’t help himself. Observe California—creating new laws make it impossible for people to be safe or happy.

-Drug dealers must be let out of prison because of bed shortages.

-Violent felons—some who have killed Americans—in California illegally will not be taken into custody.

-In Silicon Valley, American workers are being fired and replaced by foreign workers—and the Americans have to train their replacements!

-California schools—nearly the worst in the nation— are chock full of corruption, mismanagement and loony curriculum.  Reading, writing and arithmetic are out.  Brainwashing about transgenderism, anti-Americanism, and anti-Christian studies are in.

Satan is overplaying his hand in California.  He is creating a misery and despair in the youth of the state that will drive them to Jesus!

Now the audience began to see the proof of what I was saying.  A miracle, pure and simple, hits a young lady.  I love it when the Holy Spirit’s word of knowledge is so clear, piercing and detailed that people no longer see the man speaking—only God.

By the Spirit, the story of her life unfolded.  The precise illnesses of her body and the childhood trauma that caused them all was revealed.  Her total healing rocks the room.

On the heels of her miracle more healings ignite. The vivid details about people’s conditions electrify mighty praise to Jesus the healer.

Suddenly spines straighten, migraine headaches vanish.  A man in the back becomes so excited he just gets up out of his wheelchair and begins a little victory dance over his healing.  A full 60 minutes of unobstructed healings flood the house with shouts of joy and mass weeping. 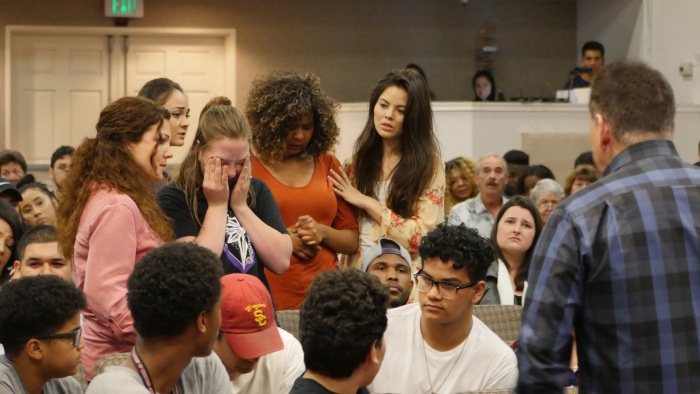 God saved the best for last.  Never have I seen conviction grip youth like this. It was as if they wanted me to shut up and let them come to Christ.  It was an instant response crowned with total surrender.  They abandoned their sin as if it were nuclear waste. Notice, in the picture, the overwhelming number of young men who came forward.  This is really good news—prophetic news about a coming youth revolution.